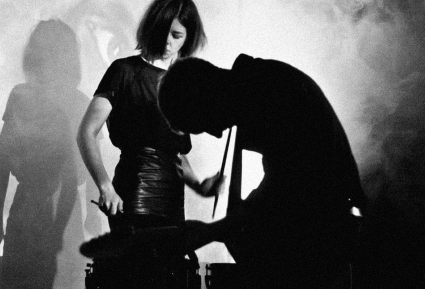 20.1.17. A date that will be cemented in diaries as not a beginning, but an unquestionable continuation of existential unknowing in modern times. Berlin’s The Underground Youth subjects such notions to a glaring bright light with their new record ‘What Kind Of Dystopian Hellhole Is This?’, a stimulating post-punk record that exists to question the contemporary conservatism.

Latest single ‘Amerika‘ steps into the very backbone of what the predicament is – that such issues in society and culture haven’t been faced sooner, as each faceless “leader” slither their way through four years of incomprehensible war and discrimination, and the sheep follow to the ballot boxes and vote for genocide and bigotry. Somehow more foreboding than earlier single ‘Alice‘, snapping percussion built like bells of mourning and preternatural chords envisage the past, present and future in a collage of one – as Craig Dyer delivers more wise perception than a barbed manifest – a vested space to vent within an undeniably uncertain time.

‘What Kind of Dystopian Hellhole Is This?‘ is available from 15th February via Fuzz Club Records. Watch the video for ‘Amerika‘ below. The Underground Youth play Moth Club in London on the 8th March.