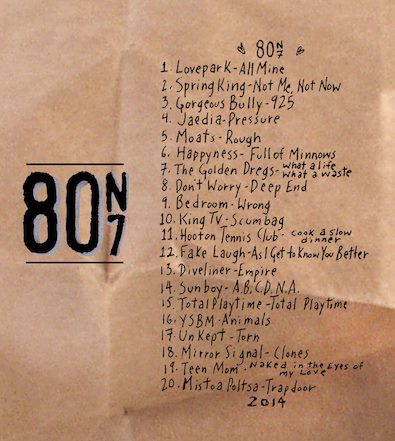 Combining a passion for music with a DIY ethos and inspirational labels that are home to such sounds, 80N7 is the joint project from the minds of Emmy Feldman and Hope Silverman, settled in bustling New York. Both working within music, they bonded over a love for unpolished, untouched music at it’s most fragile and emotionally powerful, finding sounds from new bands and acts that possessed those ideals and appealed to them most. Taking their passion for new music and wanting to share it, they’ve curated a release, also named ’80N7′, containing an eclectic circle of lo-fidelity fuzz and dream-pop that’s compelling and displays youthful vigour in abundance.

Set for release as part of Cassette Store Day on 27th September, the 20 tracks that complete the collection come from both sides of the pond, calling attention to the vast amount of quality output that is being created in not just the US but within the UK also. Feldman told us;

” Geographic diversity was definitely something we thought about, even throughout England, we wanted to be sure we covered a lot of cities, not just london you know.”

The main factor in putting together their compilation, aside from possessing a DIY aesthetic and sound, was the bands they were listening to demonstrating quality in songwriting, something she states they took into great consideration;

“Good songwriting was key, the theme of the tape came from us really wanting everything to sound timeless, like a lost B-Side. So DIY Ethos aside, when it came down to it, it was all about the songs. We just picked the best songs we could, regardless of where they were from. Fake Laugh is kind of under the radar but is the most incredible songwriter, his EP (‘Nothing But Good’) is a real grower, converging the old and new.”

From first listen, their ear for high standard songwriting is clear, even ones drenched in a surf-fuzz or cascading beats. LA’s Diveliner is what Archie Marshall would sound like if he’d been fed on smooth soul and 70s disco along with his smokey jazz-bar blues. Mirror Signal plays in minimal electronica with enveloping pop-trumpet synth that’s alike in it’s mellowness.

Happyness retain a certain shy quietness as they did on ‘Leave The Party‘, a nautical accordion-esque sound carries Jonny Allan‘s hushed tones to develop a beautifully sad, ethereal piece and The Golden Dregs have possibly come out with the catchiest chorus of this year in ‘What a Life, What a Waste‘, Ben Woods‘ deep burl of “Double Denim, it’s my venom, it helps me get by / I still regret it, never forget it, until I get high.”  laid over rock n’ roll melody bathed in the sea-air of living on the south-west coast.

80N7 have put together a compilation that is simply  built on a love and passion for new and raw music and giving it a chance to be heard. Releasing on cassette gives it that mixtape value that will please fans of the early C86 compilations, an influence on both creators of this very enjoyable and encompassing release.

’80N7′ is released on September 27th as part of Cassette Store Day.