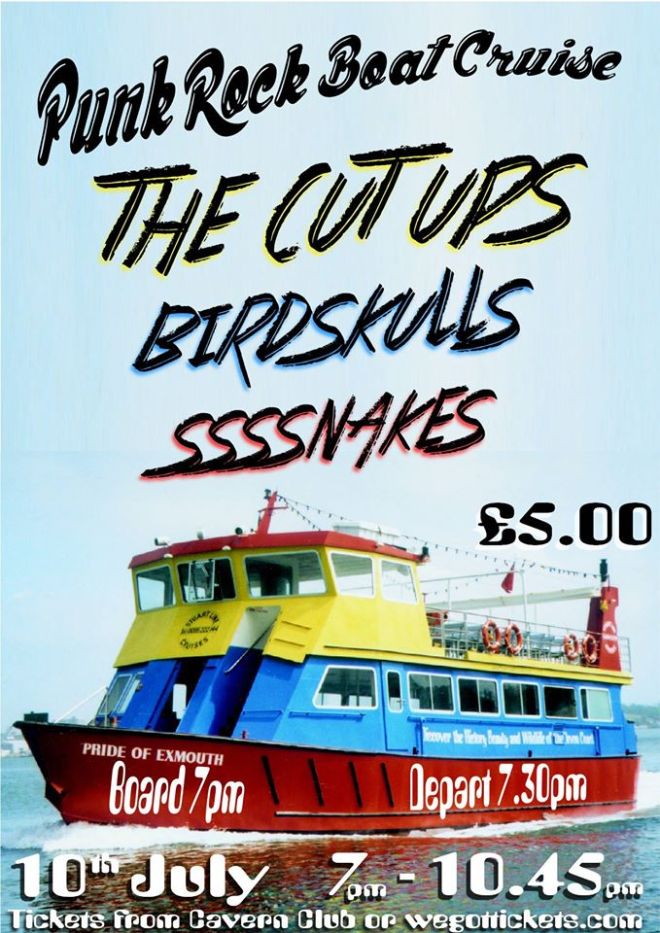 The original idea of Punk Rock was DIY ethos and ethics caveated with a unique brand of thinking outside of the box vision with a brazen mix of ‘we can do anything’ attitude. No more so was the case than Thursday 10th July when over 100 + punk rock followers donned their sea legs and boarded the Pride of Exmouth on what was the first and hopefully not the last Devon maritime themed Punk Rock seaborne extravaganza.

The vision came from Exeter’s Punk mecca The Cavern Club and  young Exeter punk rock Svengali  Nick Heron who’s can do drive ensured this event was sold out from an early stage (he even donned a snazzy sailor suit that would have made Captain Sensible green with envy for the evening).  On tonight’s seafaring menu were three helpings of local and further afield Punk Rock nastiness that all went down like that big boat that hit the iceberg…

First on the deck and with a bite like pissed off cobra were Swansea’s ‘SSSSNAKES’. These boys took the lead and set the benchmark for the night; as an opening act all the while the crowd were still trying to get their head around being on a boat the Ssssnakes led from the front. With frontman Jamie Morrison acting the proverbial serpent – he lurched, hissed, writhed, coiled and struck like the punk rock predator he is; this was early Buzzcocks, Teenage Fanclub on speed with a Swansea skatepunk twist, the crowd initially were agape as Morrison threw himself at them hard and fast all the while the band kept it tight, aggressive and wanton throughout the set, a great start to the night. As the sun slowly begun to set on the fantastic orange fire – sky backdrop, it sunk in that this cruise really was a fucking great idea.

Next up were BIRDSKULLS. Hailing from Brighton, Exeter and Bournemouth it would seem these lads were thoroughly at home on the water. The lads were unassuming calm and confident  throwing out a Nirvana influenced Blues-Punk sound, channeling love-sickness and teenage angst. That picked the crowd up from the start; young, serious and talented they stood their ground and delivered a strong credible performance that straight off the back of the opening act was no mean feat.

Exeter’s THE CUT-UPS took the headline tonight and fully deserved it was, they almost looked Clash cool as the Cavern veterans took to the deck and brought the night to raucous ending. They gave us a mix of aggressive powered pop punk with poignant English sentiment.  By this time the evening’s rum ration had kicked in as the ship headed into the setting sun and back to Exmouth; like desperate swabbies we craved more as The Cut–Ups finished up and brought an end to this unique punk package.

‘Punk is still about DIY ethics, doing your own thing and doing it your way. That’s what the Ssssnakes are about!!! ‘

All tonight’s bands delivered in spades and tonight was not only refreshing but loudly reassuring that Punk in the sometimes sleepy hollow that at times is the South West is far from sleeping – it’s kicking.