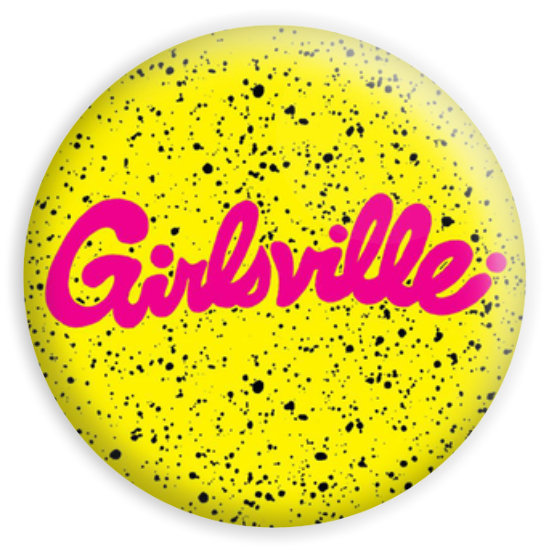 ‘The Wild Angels‘ gleams bright at the back of a record store, shelf to shelf with a tattered and wonderfully faded Cardinals 45 and an independently released mail-order tape from a scottish group in the late 80s, while The Gories play over the battered Hi-Fi at the front. There is an excitement to getting to read the tracklist, the sort of feeling that you know you’re going to unravel something distinctly individual and singular to you personally, like it’s put together for that reason. You get home and hit play to racketing distortion and a warped voice that is half rebel yelling, half reading a sermon. This is the delightful sounds of Girlsville.

Chicago, Illinois – home to one of the most punk labels in town. Girlsville is masterfully minded by music authority Courtney Del Mar, who takes a real earnest love of rock and roll and its many forms and channels that into releasing some of the most interesting treasures being put onto cassette. Whilst digging up some previously unheard rarities from some beloved cult bands, Courtney uncovers some of the golden lights that are leaving a mark here and now, creating novel compilations and desired oddities that immediately feel special upon their release. Taking some time to speak with us, Courtney delves into the heart of what makes Girlsville work so well, that being the unwavering passion that goes into its process.

Q: Looking at the label from a foundational perspective to start, what were the main reasons behind starting the label?

I had a ton of stuff in my personal archives, just from being a fan and working with bands over the years. I had a more vinyl focused label in the naughts that was interrupted by some rather costly medical circumstances. So once I could put my energy into it, I decided to start a new label.

Q: How did you come up with the name Girlsville?

Girlsville is the name of Thee Headcoatees debut LP. It’s a major influence on me personally and a cool name for a label.

Q: ‘The Wild Angels‘ is a brilliant comp that you’ve put together, combining a real range of vibes once again but all in all being a really fun sounding release. How would you describe the overall feel of the release?

Thank-you I’m glad you like it. I don’t adhere strictly to genre, other than it’s all rock’n’roll and I think the energy is fun.  If it’s on my label it’s likely to be: punk, garage / beat, girl groups, c86, psych pop, no wave, and pure unabashed guitar pop.

Q: ‘Stupid Punk Boy’ was released a year ago (Happy Anniversary!) and was a particularly popular release last year, one that found a great balance between punk and all it’s other manners. How did you approach putting it together and what influenced you to release a compilation?

Thanks! So, around the same time that I was compiling ‘Stupid Punk Boy‘, I had assisted John Dwyer (Thee Oh Sees) with the unreleased material that popped up on the Castle Face reissue for Coachwhips ‘Hands On the Controls‘ album. I had put out a lot of Coachwhips stuff on my first label and I was sitting on all this unissued material. So I happened upon that Coachwhips stuff, these really amazing songs by Purple Wizard, The Prissteens, and The Bristols. I just thought that stuff was as good, or better than anything I was hearing, and so let’s just put this all out there and see what happens.

I invited a lot of bands I’d worked with over the years, some vets that I hadn’t worked with yet but wanted to, like The Ettes and Dum Dum Girls, and then a bunch of newer bands like Abjects, Black Tambourines, Virvon Varvon, Commiserations, & Red Cords. So in some ways that comp was many years in the making. But I was laser focused on it for 8-10 months. It was also important to me that it not be a bunch of stuff that is available elsewhere because what is the point that isnt fun. I have always loved tracking down my favorite bands odds and ends on little hard to find compilations and b-sides.

Q: Something I found incredibly refreshing was the donation of profits of the release you made to the Translife Centre in Chicago. It displayed to me a sense of care that I don’t think many labels / bands / people in general would bother showing in this society. How important do you find it to spread such a message within a creative outlet?

A: Transition can be prohibitively expensive and also alienating and sometimes deadly. I liked the idea of a group home like Translife Chicago House, where there might be better access to services and community and even just shelter and food and access to what’s needed to medically transition. It’s a model I had been hoping would be implemented, so when one popped up here in Chicago I wanted to draw attention to it. It was also a way to get punks to see maybe some of their favourite bands doing something for a marginalised community, and therefore effecting change in just a smaller way within punk.  And you don’t have to be a complete bonehead to be into garage punk. You can still care about stuff, and it’s still punk. You don’t have to follow what everyone else is doing either.

Q: When it comes to approaching creative choices, would you like to look at the label and say “this is what my own personal record collection would look like” or would there be more defining factors within your direction?

A: I think the releases do reflect my own record collection. But I also listen to other stuff that I don’t release. I have a lot of 80’s and 90’s Hip Hop and Honky Tonk records from the 60’s. Tammy Wynette. MC Lyte. Roxanne Shante. Loretta. Dolly. Bahamadia. Purple Wizard are heavy on the R & B so they reflect that side of my record collection. But i’m not sure anything reflects the hip hop, the country, or the Chicago house and acid stuff. I think the Cosmic song on ‘Stupid Punk Boy‘ sounds a bit electro, it could be played in an electro set. I think there are things that thread my aesthetic sensibility together which would be maybe a lo-fi kind of raw feeling. I think that’s true for my record collection, and I hope for Girlsville as well.

Q: I personally view independent labels with real value – labels that exude the same passion for music as I do makes me more likely to be a fan . Are there any independents that have had a personal influence on how you’ve approached music and running Girlsville?

A: This is my favorite question. Labels that have influenced me are Slampt, Sympathy, Red Bird Records, Rip Off/Radio X/Super Teem, Lipstick Records, the Subway Organization, 53rd and 3rd, Hangman’s Daughter, Wild Wild Records, Slumberland and early to mid-90’s Kill Rock Stars. The Red Aunts records that were on Sympathy influenced me in a major way. Newcastle label Slampt did a lot of tapes and riot grrrl stuff in a very non careerist yet enthusiastic way – It felt very pure and very punk and there was a sense of fun to it, they were also very pro cassette being the punkest format. I would add labels like Cajual, Pop Art, old Stax and Atlantic 45’s, Cold Chillin’, No Threes Records. There’s gonna be something I think of later that I’ll wish I’d mentioned. Contaminated Records and Mailorder. M’Lady is doing great stuff currently. That Kyra reissue shot them to the top of the heap in my book, and Vexx is one of the very best bands going. Katorga Works is great. Nerve Centre Records is putting out a lot of great tapes that are being picked up by other labels and reissued so I would keep an eye on that one too. Fuzzkill and Delicious Clam are putting out great stuff. No Front Teeth, Total Punk, Rubber Vomit. There have been some excellent reissues and previously unissued stuff on Elective Affinities – Dangerhouse style old school LA punk.

Q: Lets talk about physical releases – a lot of independents, for many reasons – whether financial or other – only release via digital means. You’ve shown the desire to give your releases the cassette treatment – how important is that to you?

I used to be really into releasing vinyl, but it’s become prohibitively expensive and time consuming, and it feels like a rich person’s hobby. A rich person’s game. I’m not sure that punk should be a rich person’s game. I want non-rich queer folks and trans folks and just weirdo outcast kids, those that might not have 20 and 30 dollars to drop on new records each week. I want that person to be able to say okay i have 6 or 8 bucks, and I will support this music/ this band/ this label and still pay the rent and eat. I’ve designed the label to appeal to someone like me basically. I run the label the same way I ran my vinyl label, except I’m probably better at it now. The releases sound and look great. I have them mastered by a talented guy named Patrick Haight and they are well duplicated. Patrick masters a ton of stuff for Burger and Castle Face and he’s mastered everything I’ve released on Girlsville, they sound fantastic.

I try my best to get them on the radio and in the fanzines and blogs – and the fact that I can put a high quality download code inside each tape makes me feel good because it modernises the format, and in my mind takes care of the issues one might have with cassettes.  It’s not ridiculously expensive to press them up or ship them, and it satisfies the dumb fun in collecting cool stuff, and looking at liners. So it just feels like the perfect format for the moment. I would like to do CD releases maybe too, we’ll see. I don’t fetishise any format, I think that whole racket is a elitist and snobby. I want to get the music out there and heard and keep the prices reasonable on my end, and on the consumer end, hopefully keep things in print. I love vinyl and have tons of it. I’m not dissing any one format; I’m just not fetishising them either. I might do some lathe cuts, but tapes with high quality downloads are my hustle right now.

Q: What would you like to achieve next and in the future with the label?

I should have some new stuff out from Mr. Airplane Man next year, maybe an outtakes and rarities tape by them as well. I’d like to reissue stuff from Julie Cafritz (Pussy Galore/Free Kitten) and early early 90’s band STP. They are important to me and I think some of that stuff could use a little love through some remastering and certainly deserves to be celebrated and remembered. Any band Julie Cafritz would do would be right for Girlsville. I intend on doing a singles comp for Purple Wizard that will have some unreleased stuff and radio sessions as well. Then we’ll see where it goes from there!

‘The Wild Angels‘ is available now through Girlsville – listen below.