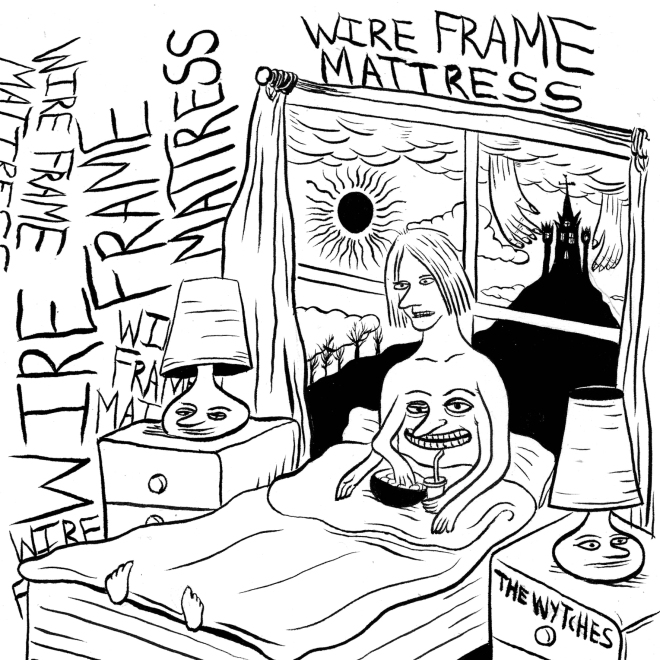 A tempestuous wind descends over the UK music scene as Brighton trio The Wytches conjure up a fresh sonic offering from their Surf-Doom dispensary in the form of new single, ‘Wire Frame Mattress‘: a sinister barrage of psych riffs and blood curdling vocals, acting as a perfect calling card for the impending release of their inaugural album debut ‘Annabel Dream Reader’.

Chords gravelly and brittle ring out at the start of ‘Wire Frame Mattress‘, signifying once again that guitarist Kristian Bell has created a landscape fit to illustrate any horror or nightmare of one who lives in deep anxiety and distress maybe be haunted by. As the song pulses through hypnotic riffs and a wall of guitars slathered in murky distortion, one can’t help but feel the distant haze and dread of the character portrayed in the lyrics, with Kristian lazily and sullenly singing, ‘you sit there and laugh while my dignity collapses’, before all instruments fall into themselves and writhe around in a bludgeoning post chorus.

Things change come the 2:03 mark as the song switches gears and manoeuvres into a slick and brooding middle section. The band wear their surf influences on their sleeve as glistening and etherial chords ring out in the same manner as what could be found on a Dick Dale or The Atlantics instrumental, but in this case, contorted and surly, eventually leading into crushing coda and providing the final assault of wailing and penetrative leads that the songs hurls at the listener.

Below is a link to the new video for ‘Wire Frame Mattress’ filmed by legendary Rock photographer, Steve Gullick. Set in an old social club, the video perfectly depicts the mist and haze of the world in which The Wytches live, and ultimately gives an exciting preview as to what the August release of ‘Annabel Dream Reader’ will bring.